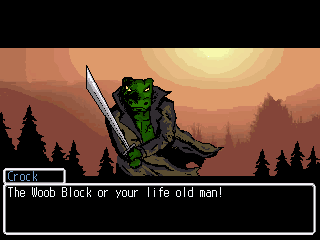 (from Wooby RPG: Legend Of The Woob Blocks GamePage on RMN by Dookie - February 4th 2015)

''Wooby RPG - The Legend of the Woob Blocks'' is a Paint stylish incomplete cancelled RPG demo made by Team ''Dookie'' created with RPG Maker 2003 by Enterbrain. 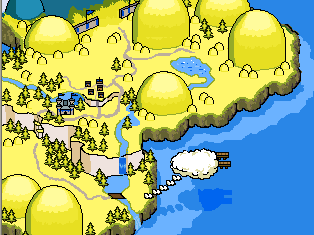 In the beginning of time, Mother Nature took constant care of the Great World. But, like all things, her spirit began to fade. Knowing this, she sealed her powers into several mysterious blocks and hid them in the darkest corners of the world, having faith that in her absence, a hero would rise up and use these blocks to restore balance to the earth. 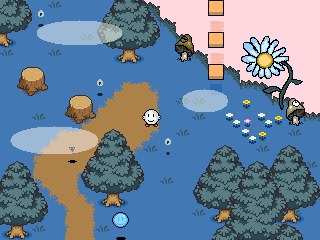 After many years, rumors of the Woob Blocks began to surface. Evil doers from all edges of the Great World mobilize their forces, and begin searching the globe for these amazing treasures.

Wooby's father, keeper of one of the Woob Blocks, is robbed by his family's arch nemesis, the villain known as Crock. Its up to Wooby to seek out the Woob Blocks before they fall into the wrong hands!

(...Noticed the download was down over on RMN, uploading it here for posterity's sake)

known bugs:
*if at one point you get teleported to the ocean, hold ctrl and walk up a little bit, and go in the town near the castle
*if when leaving lavendar country on worldmap and trying to enter the checkpoint between the purple and green countries there may be an invisible blockage in the way, just ctrl by it.
Posted by RPGMAKER2003 ARCHIVE at 9:38 PM No comments: