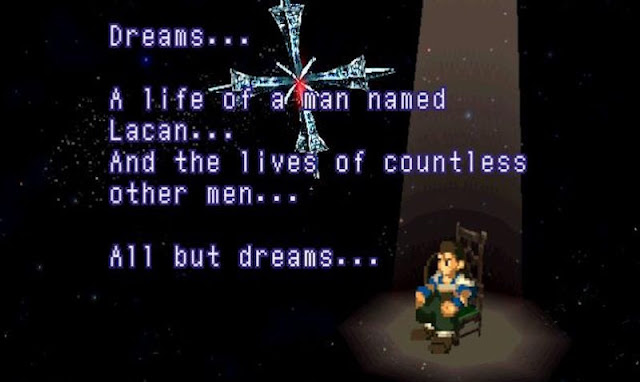 Xenogears, widely considered one of the greatest role-playing games ever made, has long felt to fans like an unfinished product thanks to its controversial, seemingly unfinished second disc. Although western gamers have assumed that the team simply ran out of money, the real story—as revealed by director Tetsuya Takahashi to Kotaku today—is a little more nuanced.

Whereas the first disc of Xenogears is a sprawling role-playing game, full of towns and dungeons and beautiful cut-scenes, the second disc takes a different approach. Disc 2 of Xenogears chooses to tell rather than show the game’s epic finale, putting main characters Fei and Elly in a dark room and having them narrate the game’s climactic events while a slideshow plays on a screen in front of them. It’s an unusual and jarring change of pace.

Conventional wisdom has long been this: Square ran out of money and rushed the team, forcing Tetsuya Takahashi to put Xenogears’ second half together with duct tape. Fans have always believed that Takahashi had more ambitious plans but was forced to ditch them because of budget and time issues.

As far as I can tell, however, there’s been no official explanation since Xenogearswas released 19 years ago. So while interviewing Takahashi during E3 in Los Angeles today about his new game, Xenoblade Chronicles 2 (more on that soon), I had to slip in a question about that urban legend. Xenogears is one of my favorite games, I said, but what happened to that second disc?

“Honestly speaking, what had happened is Xenogears as a project was staffed pretty much entirely out of new staff members, young staff members,” said Takahashi, speaking through a translator. “Back then, we had the direction of, ‘All projects take two years and that’s when we need to get it done.’ So on top of developing the game, we had to nurture and teach and grow these younger employees. Things like 3D were extremely new, which led to some delays in the schedule. It just wasn’t possible to get everything done.”

As it became clear that Takahashi and team weren’t going to hit their deadlines, Square’s higher-ups suggested that they just end the game after the first disc, when Fei and his team escape from Solaris.

“It was a rough way to end it, and I felt like if we do that, then the players will not be satisfied,” Takahashi told me. “So we had a proposal—I proposed that if we do disc 2 in this way that it turned out to be, we can finish the game with the current number of staff and the current time allotted for the schedule and the remaining budget we have.”

So they turned disc 2 of Xenogears into the montage that shipped with today’s game. Instead of playing through events like the world’s mutation and the search for Fei, you just have to watch them. And it was Takahashi’s decision—so he could finish the story he wanted to tell rather than cutting it off after the first half.

“I do think my decision was the right one to make,” said Takahashi. “Because if we had just ended at Disc 1 it would have been bad.”

(Note:Really bad cold this month, will update more once things are more normal)
Posted by RPGMAKER2003 ARCHIVE at 4:47 PM 1 comment: