"Space Funeral stars a crying miscreant named Phillip who faffs about in striped pajamas while beating up bloody dogs. We aren’t talking a few stray tears, either. He’s full-on ugly crying, grimacing in pain and shuffling through life looking as though his mother hates him. It kind of seems like she does, and his dad too.

It’s not immediately apparent why Phillip is sad when you start up the game, whose options are “BLOOD, BLOOD and BLOOD” at the main menu. Maybe it’s because there’s a coffin with someone in it who looks just like Phillip. Maybe Phillip exists in a state of existential torment and anguish that reaches into his very soul because he lives in a world where a creature known as a Leg Horse can amble up to him and verbally berate him, a contorted mass of bloody stumps with no real regard for anything other than itself. Perhaps it’s because he knows there are no other games like Space Funeral; nothing to rival the attitude or the aesthetic, which I harbor an intense and passionate love for.

From the clashing color schemes to the flat 2D Frankenstein monster-esque heads that seem as though they’ve been scribbled on in MS Paint, Space Funeral is like an acid flashback filtered through RPG Maker and set to Ruth White’s bizarre spoken-word “Spleen,” and is beautifully corrupt and broken in every single way, down to the surreal landscapes, creatures, and ideals that permeate the land. What seems to exist totally at random is explained ever so succinctly by the end of the journey, which makes the ugliness of it all feel even more special. It’s grotesque, terrifying, and crude. And that’s why I love it so much, misshapen heroes, enemies, and all." 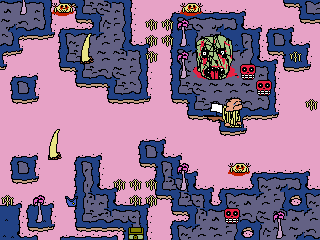 "A surrealistic turn-based RPG that is just strange. With a weird artstyle and sloppy animation, but surprisingly interesting setting and soundtrack, it isn't very long (lasting about an hour or two) and is quite a different experience for those who seek it."


Via RMN
Mirror Download
(Will up date this entry with a video I have in the works
There were a couple of other places that mentioned Space Funeral during it's time of release, which i'll also include later on)


Via RMN
Mirror Download (English)
Posted by RPGMAKER2003 ARCHIVE at 7:44 PM No comments: