Update: Reposting, because people kept visiting the old blog page,
(Decided to update this to RTP-free, the old entry can be found here download below)
(The rest of the GamingGroundZero Games, can be found here)
"Sparked a new era of rm2k games." - gamingw.net Aug 2003
"The first real custom system(s) game to wow the community." - rpgmaker.net June 2012
"Literally taught me how to program as a kid." - anonymous Oct 2017 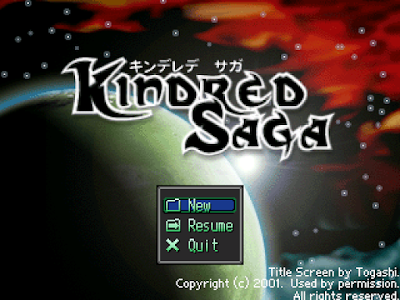 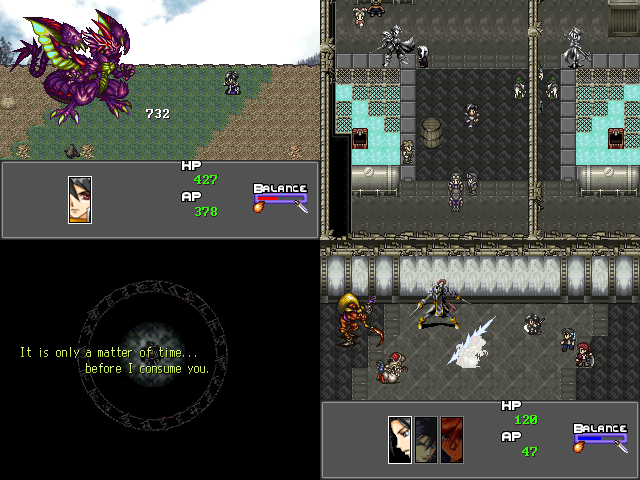 "It is only a matter of time…before I consume you” These are the words that plague Slain's dreams, as he awakens in Terrason, a now dead city, segregated by class, into a chain of districts, each separated by an impenetrable wall. He along with Jagan and Lance, live in District 5 of the Dayga Block, an impoverished area where inhabitants struggle to get by, crowding in wherever there is space.

With plans of stealing the Genesis Rune from Bendale Manor, an invaluable gem worth millions, Jagan and the others, hope of finally leaving the city in search of a better life. But on the night of their biggest heist, Slaine is haunted by a recurring dream of a dark magician, a kindred spirit who threatens to consume his soul...

Released in 2001, Kindred Saga is a game created by Qheretic (of GamingGroundZero) which utilizes a custom side-battle-view system in rpgmaker2000
(1 year before rpgmaker2003 was released!)

Kindred Saga combines:
- the co-op tech abilities of Chrono Trigger,
- the character field puzzles of Breath of Fire,
- the dark and dreary setting of Final Fantasy 7's midgar,
as well as many other influences found in jrpgs from the mid to late 90s.

While unfinished, Kindred Saga served as a major influence for many aspiring rpgmakers during the early 2000s that still contribute to rpgmaker to this day. We've decided to upload the game here for reference sake, as part of the rpgmaker classic archive initiative, in order to give future makers the opportunity to examine how it utilizes various game mechanics from numerous jrpgs in order to create something new - so that these games are not forgotten.

Kindred Saga PC Download (RTP free)
Kindred Saga Mac Download
Mac (Beta)
-lag during battles/picture use
-Issues with Midi playback on Mac Operating System:
- OS X 10.6, 10.7, (midi is too quiet/certain songs will lead other songs to not play right - if this happens, save, quit/close, then reload the game)
-lag and sound issues aside, otherwise 100% playable
Credits (Included in PC download)
Walkthrough (Included in PC download)
Posted by RPGMAKER2003 ARCHIVE at 10:31 AM No comments: