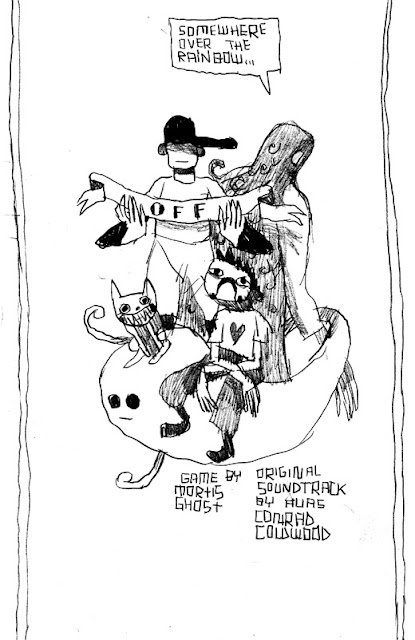 "Communities centered around RPG Maker used to be very active a few years ago. The French-speaking scene was no exception; some might say it was a little world in itself. It's no surprise Enterbrain's legendary tool attracted so many people, mainly beginners who had no knowledge of game design at all, but really wanted to make their own game. Of course, game design is difficult, so only the most determined of those makers managed to complete their projects. In spite of the flow of games that were ultimately cancelled or sometimes not even started, what could be nowadays called cult classics ended up marking their era. It's not rare to find French gamers that didn't really follow the development scene but know about games like Dark Soul, Aëdemphia or Mystery of Solarus nonetheless.

And it's been two years now since a certain game born from this background started garnering popularity in English-speaking forums: OFF, which was initially released in May 2008 exclusively in French after a year-long development with RPG Maker 2003. It was granted several "Alex d'Or" awards at the time, but its popularity remained confined to a somewhat private audience within the French-speaking web.

It was a ground-breaking success from a critical standpoint, though, and dedicated fans collectively known as the "Reconstructed Game Team" would go on to make an English translation of the game in the hope that it would help it achieve much deserved international success. And their hard work paid off. OFF ended up becoming a cult hit in foreign niches.

The team behind OFF, called Unproductive Fun Time, is actually a collaborative effort between two twenty-something Belgian guys who had been friends since high school: Mortis Ghost and Alias Conrald Coldwood. Mortis first and foremost a comics artist, but he was also fiddling with RPG Maker since his early teens, and he decided to initiate a more serious project around 2006. He produced a draft, which he showed to his friend ACC, who was interested enough not only to offer his help as a programmer, but also to propose to compose a soundtrack. One of the main concepts behind the production was the use of purely "custom" assets, in opposition to the frequent reuse of the software's stock libraries in such productions.

Besides, you'll need to forget your potential prejudice towards RPG Maker-made Western amateur games. Not that you could really be blamed for it, though. Cliché'd plotlines, generic backgrounds and overall lack of depth are rife in these productions. But then again, if you thought two unknown guys couldn't possibly make a difference, you'll see how you'll have been mistaken..."

(...need to find a better trailer)
(From NeoGaf- "RPG Maker Games: Underlooked Gems" by Dust Golem 12-26-2012)
"OFF is a free French RPG where you take control of a mysterious person called “The Batter”, who is described to be on an important mission. The Batter, and yourself as his controller, are dropped off in zone 0, the first of 4 zones in a perplexing, unknown world about which you slowly find out more and more in the process of the game.

Known for its amazing characters, original soundtrack, and a twisted yet entertaining journey into the depths of this strange world, it is worth it for fans of RPGs, especially those that like Mother 3, which it draws some inspiration from. It is very off-beat, but very well made."