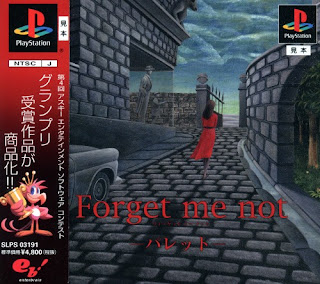 "When Yume Nikki started to become popular in the West a few years after its initial success with 2ch denizens in 2004, it became obvious that the sometimes-derided RPG Maker tool was not only capable of producing good games, but also very original takes that didn't even have anything to with RPGs. Indeed, Yume Nikki soon became a cult hit both in its native country and abroad, as well as an icon of what amateur development could do best. Team GrisGris's 1996 Corpse Party is an earlier example of RPG Maker-made "non-RPG", but it was somewhat classical in its game design and lacked Yume Nikki's distinctive blend of conceptual adventure and psychological horror. However, what a lot of people seems to ignore is that Yume Nikki still isn't the first in that kind of production.

We need to go way back in time, six years before the Yume Nikki phenomenon. In 1998, the multimedia giant ASCII Entertainment organized its fourth entry in a series of annual competitions where contestants were required to submit a self-made game created using either RPG Maker or developed from scratch. That's when a man called Nishida Yoshitaka - nicknamed "Yubiningyou" - came in with a strange project developed with the help of RPG Maker '95 titled Palette. And it didn't have anything to do with the RPG genre at all..."

"Palette was originally released in Japan in the mid-90s, and won an award at the Fourth ASCII Entertainment Software Contest, granting the creator 10 million yen. With that money, he went on to remake his game and release it on the PS1 in Japan in 2001. This game is very unknown at this time, but of very high quality. The reason in big part is as the game is rather text-heavy, and has never been translated (officially or by fans) for any language outside of Japanese.


The game stars a girl, referred to as B.D., whom apparently turned amnesiac by an accident, restore her memory as a well-known psychiatrist, Dr. Shian. Players essentially control B.D. in the scenery of her memory, which constitutes a maze with rooms and passages. In exploration, there are two modes of gameplay; in one mode, maps are colored in black and white often sprinkled with bright red, that denotes for example blood, with a noise continuously ringing, in which players can go between maps. With B.D. moving to another map, the gauge shown on the right side of the screen decreases one by one, it occurs also when B.D. touches barriers that are placed occasionally in maps. When the said gauge reached the bottom line, B.D. claims headache, and players would be sent back to the map of Shian's office. Shian would call her again to continue the game.

As you can't really play the game without knowing Japanese (and there is very little about the game online currently), you can watch a Japanese Let's Play of the original version here, and the PS1 remake here."